Zombie Farm is a decentralized exchange that runs on Binance Smart Chain and Pancake swap exchange, among other features that enable you to receive and win tokens.

The Zombie Token is an attempt to construct a permanent deflation token that allows for a continuous price pump with a proper burn mechanism. We are not attempting to replace swap and share, but rather to bring value to the scheme and create a suitable and safe ecosystem for people to yield high APR farms.

ZUSD is a digital currency that can be sent and received in the same way that email is. ZUSD is distributed by a licensed financial institution and is redeemable for US dollars 1:1.

It’s a programmable dollar that travels at the speed of the Internet to and from anywhere in the world, and it’s built for the future of banking, esports, and gaming, among other things. As a programmable currency, ZUSD has the potential to revolutionize the gaming industry by allowing brands and esports organisations to tailor their interactions with fans.

ZUSD will be introduced to several blockchains, beginning with Ethereum, which will be compatible with thousands of goods and services, such as digital wallets, exchanges, lending, and payment services.

While staking, you can earn Zombie Tokens and other coins (to be determined).

At the contract’s inception, a time lock was applied.

Migrator coding has been removed (inherited from Pancake swap)

Layered farming is a perpetual farming tool to allow Zombies to constantly enjoy a high-risk high-reward APY yield farming. Imagine a new xxxxswap site but hosted on Zombie Farm where you can ape your money into it with no rugpull, no dumping, no hidden pool!

Zombie Farm will be the first to disable Rugpull Migrator Code.

All farms take a 4% burn when you stake.

3% will be used to purchase Zombie Token and sent into the lottery pool.

– Zombie IFO (work with other projects)

– Launch of Phantom Token. The new token $PHANTOM will be released on May 24, and The Unholy Trinity will be completed.

– Algorithmic Pegged Coin. More information will be released when the tech is nearly complete to prevent people from stealing the idea. (Using Zombie to farm it) 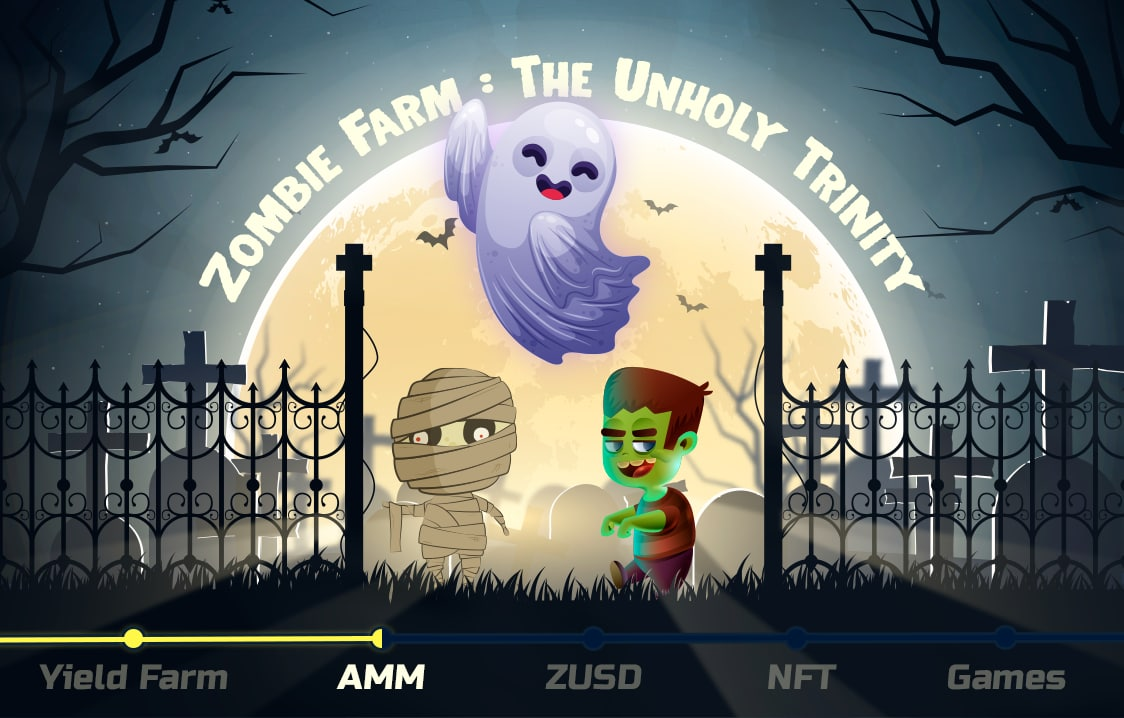 9.09% will be sent to the developer’s address for further partnership & developer funds.

9.09% will be sent to the developer’s address for further partnership & developer funds.

PHANTOM is a layer 2 privacy framework. PHANTOM’s goal is to permit private smart contracts that use the protections of its delegated proof-of-stake layer 1 while allowing transactions to take place on its layer 2 network. The PHANTOM blockchain’s native token is XPH, which is used to stake, pay fines, and rule the network.

The Phantom Token Approach is a pattern for securing APIs and microservices that blends the reliability of opaque tokens with the simplicity of JWTs. The concept is to have a by-reference and a by-value token pair.

The new token $PHANTOM will be released on May 24, and The Unholy Trinity will be completed.

– 4% deposit fee will be charged at staking.

– 75% of the deposit fee (4%) will be allocated to buyback ZOMBIEs and burnt.

– Buyback & burn with the 5% of total deposit fee everyday

– Every transaction (send, swap, farming, etc.) of ZOMBIE will be charged a 2% transfer tax.

– 2% transfer tax will be burned directly in every transaction.

– Use 2.5%+ slippage to buy ZOMBIE on PCS or other AMM. Less than 2% slippage will cause the transaction to fail.